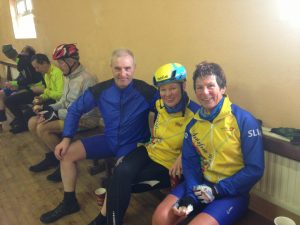 On what was a very unusual year for cycling – or indeed most sports, our club managed to get through two lockdowns and many restrictions virtually unscathed. We got most of our members to participate is some sort of training regime and even had seven of our racers participate in the Summer Cycling League – with a number of them coming away with prizes.

During the less restrictive second lockdown John Delorey initiated a very successful Lockdown Challenge. This enabled members to set themselves a mileage/kilometre cycling challenge each week. This could be done individually or in small groups.

The highlight of the year, however was the successful staging of our annual Santa Cycle on the 6th of December.
On that day also the Club Person of the Year 2020 was announced. This award deservedly went to one of our hardest workers within the club – Martin Keville.

Martin has been active in many aspects of cycling within our club now for a number of years. He was a leading trainer in the Bike For Life scheme for a number of years. Here, the newbies to cycling received a six week intensive cycling course which covered all aspects of cycling techniques and safety. Thanks to Martin, and his co-trainer Paul Duffy, most of these participants quickly joined Innisfree Wheelers and have themselves contributed greatly to the club since joining.

Martin leads by example and his contribution to charities both within club activities and outside has been outstanding over the years.
As the photo shows Marin and fellow Wheeler Seamie Clifford cycled from Mizan to Malin (641 Kilometres) in 2019 in memory of Martin’s brother Tom and raised an enormous sum of money for the COPD charity.

The Mizen Head to Malin Head charity cycle in aid of the Sligo COPD Support Group took place in June 2019. Over the a number of weeks, the group has a number of local fundraising initiatives planned, the final event being a social dance in the Rainbow ‘ ballroom of Romance’ in Glenfarne on Bank Holiday Monday night, 3rd June 2019. The idea for the cycle came from Martin Keville. “I’ve been a cyclist with the local Innisfree Wheelers Club for many years. Last year, following a long day in the saddle in the Wicklow 200 cycle event, my friend Seamie Clifford (another Innisfree Wheeler) and I began to think about a bucket list aspiration we had, to undertake a Mizen to Malin cycle.

“We began to plan for Summer 2019 and enlisted my brother Norman to cycle with us, together with his friend Jonathan Lockart, and my other brother Pat agreed to be our support driver. This also being the year of my father’s fifth anniversary, in his memory, I thought it would be nice to use our cycle as a fundraising event for the Benbulben COPD Support Group, Sligo,” said Martin pictured with Seamie Clifford. Tom Keville, from Swinford, passed away five years ago, after a long period of respiratory illness. Dependent on regular oxygen use during his last few years, he very much enjoyed the comradery and support of his local Mayo COPD group and their monthly get-togethers, said Martin.

Apart from all of this Martin also makes out the weekly Sunday spin schedule for the club. This consists of three 10am spin and one 9am spin with leaders rotating each week.

So congratulations to Martin on a very well deserved reward and recognition of his great work inside and outside of our club.