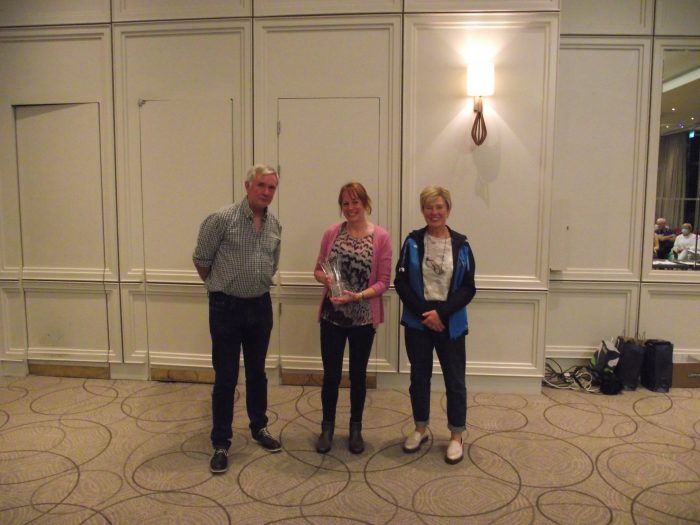 Loressa is Innisfree Wheelers Club Person of the Year 2021

Loressa Tymon received this award at our club’s recent AGM. The award has been given every year to a member who makes an exceptional contribution to the club and to leisure cycling in general.
Loressa has been involved in many projects on both the social side and the development of cycling for beginners and improvers. Loressa has been a hard-working member of our committee and this among other things proved to be the reason for the award.
The recent Covid lockdowns was a challenge for many club members. Loressa, along with her fellow committee members, devised many alternative events and methods to ensure that our active cyclists were kept motivated throughout this period.
Loressa has also been a tireless worker within the club and is an accomplished spin group leader. She also facilitates riders with challenges on these spins and patiently accompanies many riders who are just developing their cycling skills. Loressa often headed out on a Saturday to scout a particular route that would be suitable for the club’s Sunday spin the following day.
Overall a very worthy, popular and deserving recipient of this award for 2021. Congratulations Loressa!
Pictured making the presentation to Loressa Tymon (centre) are Chairman, Martin McCabe, and Assistant Secretary, Pamela Scanlon. 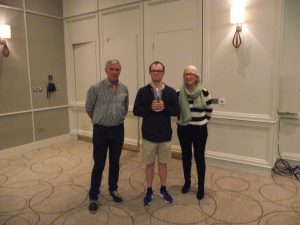 Stephen Gallagher receives Special Merit award from Innisfree Wheelers
For only the second time in its sixteen-year history, Innisfree Wheelers have given out a Special Merit award to one of its members. The award is reserved for members of the club, who make a great contribution to the success of the club as an all-inclusive cycling club for leisure cyclists.
Stephen Gallagher was the very worthy recipient of the award this year and received his trophy at Innisfree Wheelers recent AGM. Stephen is a familiar figure as a staff member to customers of Cosgroves Centra in Maugherboy. However, since joining Innisfree Wheelers Cycling Club, he has gained many admirers within the club for his dedication to leisure cycling. Stephen is a very regular rider on our weekly Sunday Spins.
Geraldine Delorey is Stephens mentor within the club and he first made contact with the club by riding in our very famous annual Santa Cycle some years ago. Only recently, Stephen and Geraldine completed the annual Three Counties Tour. This event covered a distance of some eighty-eight kilometres!
Well done Stephen and keep up the cycling.
Pictured receiving his award is Stephen Gallagher (centre), with Club Chairman, Martin McCabe and Club Group Leader Geraldine Delorey.

Many Changes to Personnel at Innisfree Wheelers AGM
Innisfree Wheelers Cycling Club held its Annual General Meeting recently and as usual many changes were made to the officers and outgoing committee.
In his address to the meeting outgoing Chairman Martin McCabe outlined the many activities that the club got involved in despite the lockdowns over the past two years. He said that the club had run novel events as well as some virtual versions of regular events, which resulted in Thousands of Euro’s being raised for local charities.
One of the most recent of these events was in fact Martin’s brainchild – The New N4 Cycle between Collooney and Castlebaldwin and return. There was a massive turnout for this event and Covid restrictions limited numbers to two hundred. The large sum raised went to Sligo Hospital Oncology Unit Trust (SHOUT).

Martin who was bowing out after his two-year stint as Chairman paid tribute to his fellow officers – Secretary, Caroline Brennan and Treasurer John Molloy. Both of these officers were also stepping down. Many tributes were, in return paid to Martin for keeping a steady ship despite some serious challenges posed by the Covid restrictions and other factors over his two-year period in the Chairman’s seat.

Treasurer John Molloy showed the club to be in a very healthy financial position.