While 2020 and 2021 were relatively quiet years for most cycling clubs, including Connacht leading leisure club, Innisfree Wheelers, this year promises to be one of the busiest yet. With numerous cycling events at home and abroad, the members of Wheelers are all set to embark on some testing events. They also plan to stage a number of club events in Sligo which should attract many leisure riders from throughout the country.
As the restrictions began to ease last year Wheelers staged two events which proved to be a great success. In early September, the Three Counties event attracted over one hundred riders, and proved to be a very welcome return to the local roads for many riders.

On Sunday the 5th of December Wheelers once again staged their Annual Santa Cycle to the Strandhill area. This proved to be a great success, with the weather being kind to the riders on the day. The previous day Wheelers staged their Annual Static Cycle in Quayside Centre. Both events raised over three thousand Euros which was recently presented to Sligo Lions Club Christmas Food Appeal.

Over a number of weeks in the Summer of 2021, Wheelers participated in the County Road League, with the other two Sligo clubs, Bottecchia and Yeats CC.

First up for Wheelers in 2022 on the 3rd of April will be the Five Peaks Challenge. This is an event open to all cyclists in Sligo who would like to do an event in conjunction with Charlie Birds climb on the 1st of April. The riders will contribute towards a local charity when their Sunday Spin will take them over the peaks, of Glenboy, Saddle Hill, Glenanniff, Rossinver and Benbo mountains.

Following this Innisfree Wheelers will continue a Back in the Saddle challenge for the full month when they will register their cumulative distances ridden and also contribute their donations to another local charity.

On the 8th of April almost thirty Wheelers and friends will depart from Knock Airport bound for Palma for their annual training camp in sunny Majorca. This will be a welcome return to their regular Spring break abroad. Wheelers have gone to such places as Italy, France, Majorca and Mainland Spain almost every year since 2007.

The 1st of May will see the return of Innisfree Wheelers Famous Spring Classic Sportive which comprises two distances of 120 kilometres and 60 kilometres. The event this year is being run as part of a Connacht Cycling series, along with other sportives in Galway, Mayo and Roscommon over the Spring and Summer. This will be very similar to the once famous and popular An Post Cycling series. Entries for this great event will soon be open, and as per all sportives now entries will be only online.

On Saturday the 11th of June Wheelers stage their unique Ladies-only Tour of Lough Gill. This event which for many years was the only women’s only cycle, has now been running for fifteen years. The club’s male members take on the role of marshals and backup for that day. With Wheelers now having roughly 50% of their one hundred plus member’s female it is a great day out for many female riders in the region.

On the following day, the 12th of June, Innisfree Wheelers will send twelve of their most experienced riders to the most famous and toughest sportive in the country, The Wicklow 200. This event will attract thousands of riders and will be staged over a series of climbs in the Wicklow mountains.
On the 28th of June over thirty Wheelers will take on their biggest challenge of the year – The Mizen to Malin ride over five gruelling days.

Over six hundred kilometres will be covered by the Wheelers riders over the five days and again a number of local charities will benefit from the Wheelers unique efforts in this Ireland end-to-end epic ride.

On the weekend beginning on Friday the 1st of July, three Wheelers will participate in a festival of climbing in the French Alps. Seamus McGowan and Paul Flynn will take on the Grimpe Alpe D’Heuz on Friday while Pat Moffatt will make his debut in The Marmotte 175km Challenge on Sunday. This event is considered the toughest sportive in Europe and comprises some five thousand metres of climbing in one day.

On Sunday the 7th of August then, Wheelers will have a large number of riders in the Leitrim Glens Sportive. This consists of three different distance of 200k, 150k and 50k, all starting and finishing in Manorhamilton, County Leitrim.

On Saturday the 10th of September, Wheelers will stage their third major event of the year with the 80km Three Counties Tour. This great sportive is now running for some twenty-five years. It starts and finishes in Sligo and should attract a large number of cyclists from the North West who wish to taper down their season with a scenic spin over the roads of Sligo, Leitrim and Donegal.

Wheelers Photo 1 – (Above) – shows a presentation of €3,081 to the President of Sligo Lions, Michael Leydon by Innisfree Wheelers Chairman Alan Kelly. This money went directly to the Lions Club Christmas food vouchers for the needy in the Sligo area. Also included are some members of Innisfree Wheelers Sunday Spin group.

Wheelers Photo 2 – shows one of Innisfree Wheelers Sunday Spin groups relaxing at their coffee stop out at Aughris Point, where the weather in January was almost like Summer conditions. 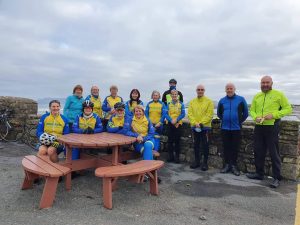 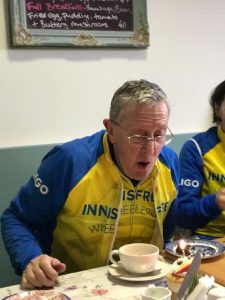