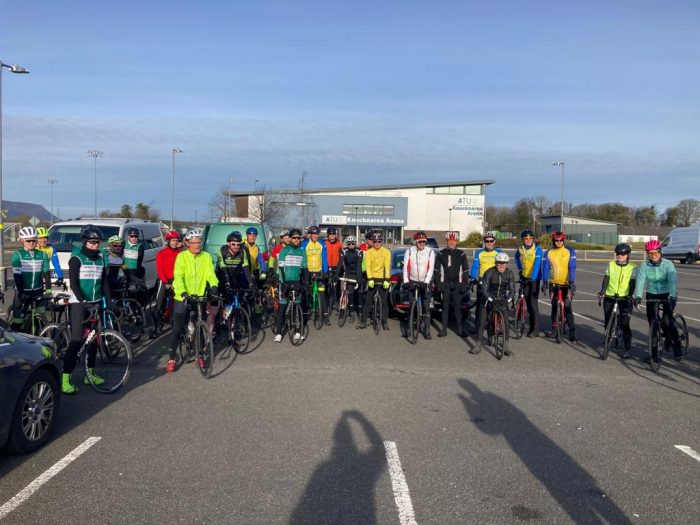 Five Peaks Challenge brings out the best in Local Cyclists;
Charlie Bird has inspired many people in this country with his walk up Croagh Patrick on Saturday the 2nd of April. One day later, a large group of cyclists (ladies and lads) assembled at IT Sligo to begin a charity cycle – The Five Peaks Challenge in conjunction with Charlies event.

Cyclists from Leitrim Cycling Club, Yeats Country CC, Ballisodare Bay CC, Eire Og CC, Bottecchia CC and a handful of other cyclists turned out as well as a hard core group from the hosting club Innisfree Wheelers on a sunny but chilly Sunday morning at 9am.

There was no registration, no entry fee, just a voluntary contribution into the charity “bucket” sitting nearby. A very brief outline of the course was given by an experienced Wheeler, to explain the trickier aspects of some of the climbs and most importantly the descents.

The course was marked with directional arrows (well some of it!), and riders were advised to take their coffee break in the Rossinver Organic Centre. (It was the only coffee stop directly on the course near the half-way point). There was no lead car, no marshals, but one van drove round posing as a broom wagon!

Essentially it was an ordinary Sunday Spin – apart from the fact that the riders had to climb a total of 1660 metres over the one hundred and ten kilometre route. And ride they did – every man and woman completed the event and a big congratulations to them all for completing this very tough challenge so early in the cycling season.
Thanks for their generosity both in spirit and in the rigorous physical challenge which they took on in aid of the Irish Motor Neurone Disease Society. 100% of all contributions on the day will be presented in due course to that great organisation.

Thanks also to Innisfree Wheelers members, local cyclists from other clubs and others, who could not cycle on the day but contributed also to the fund. Innisfree Wheelers members who didn’t take part in this challenge, did other challenges like mountain walks, and trail walks and a big thanks also to them for raising funds for this worthy cause also.

Wheelers members have just commenced their month-long April Cycling Challenge and a big Bone Voyage to our group of twenty eight cyclists heading off to Majorca this Friday the 8th of April, for a week-long cycling holiday. We hope you have a very enjoyable and relaxing break, and enjoy the sunny cycling there.