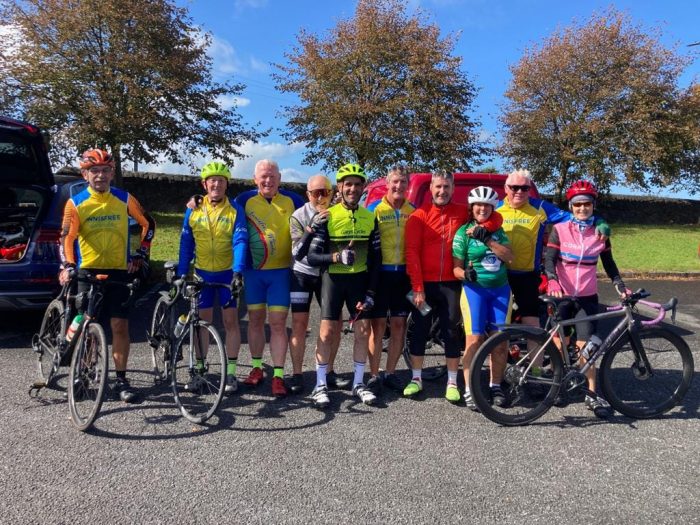 With Covid restrictions finally ended, Innisfree Wheelers held their Annual General Meeting recently which was attended by over seventy of their members.
The occasion was somewhat saddened by the fact that only one month ago we lost one of our most treasured members who died following a road traffic accident which happened on the 2nd of October at Collooney.

Pam Benson was seventy-eight years old but had the physique of a forty-year-old and a heart of gold. She was an inspiration to all club members and it’s not an overstatement to say that she was loved by everyone who knew her.

A minute’s silence was observed at the start of the AGM, for Pam, and the club plan in the coming year to put in place a permanent and appropriate memorial to Pam Benson. Ar dheis Dé go raibh a hanam. 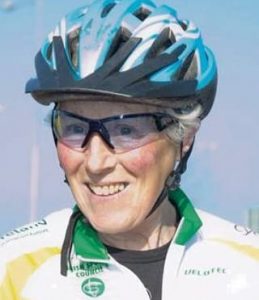 The meeting opened with the Chairman’s address. Alan Kelly outlined the highlights of the clubs many activities throughout a very busy year. The highlight of the year was the clubs massive undertaking of the epic Mizan to Malin 600 kilomtre trek. This took place in June and the thirty riders enjoyed a relatively dry five days in the saddle for their cycle. Alan paid tribute to all participants and also the sub-committee who worked so hard in putting this event together.

Next up was Secretary Anne Osborne’s very detailed report of many of the numerous club’s activities throughout the year. Many members took part on events locally, nationally and internationally. From our own four sportive’s to the Wicklow 200, and many other leisure events at home and abroad, our members were active for most of the cycling season.

The club even contributed to the summer league by organizing two legs and having a few participants who won category awards in the league. Coaching events and first aid classes were organized and very well attended by members also. Of course, the club spins then have got bigger and more numerous as a result of the increase in club membership. We now have four groups out each Sunday and at least two groups each Tuesday and Thursday also.
In her detailed financial report club Treasurer Viole

t McDermott showed the club to be in a very healthy financial position. The club as usual contributed thousands of Euros to local charities from our events, with a very large chunk being raised by the participants in the Mizan to Malin cycle.
The meeting then continued with the election of officers and committee for the coming year. The following were elected.

An open forum for members then took place and there were lively contributions with some great suggestions for the future coming from the floor. This concluded the business of the 2022 AGM.